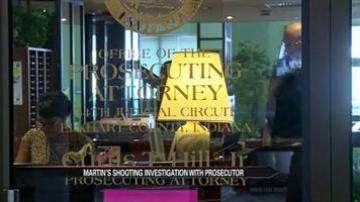 The two detectives met with Elkhart County Prosecutor Curtis Hill for almost an hour and half.

On January 15, Shawn Bair is accused of entering the Elkhart Martin's and shooting two women, one employee and one customer. He allegedly held the store manager at gunpoint.

Indiana State Police then headed the investigation into all aspects of the incident.

The two officers who responded to the shooting and killed Bair, Corporals Cody Skipper and Jason Tripp, were honored last Wednesday in Indianapolis.

It was the first time they spoke publicly about the incident.

"My partner Jason Tripp and I, at the time, were doing our jobs. Honestly, our community stands behind us which is very fortunate," said Skipper last week.

"A situation like this you train for and you try to prepare for, but until it happens you don't know how it is. It just makes me so thankful for everything I have," said Tripp last week.

The prosecutor said he is going to review the case right away and will release information relatively soon.