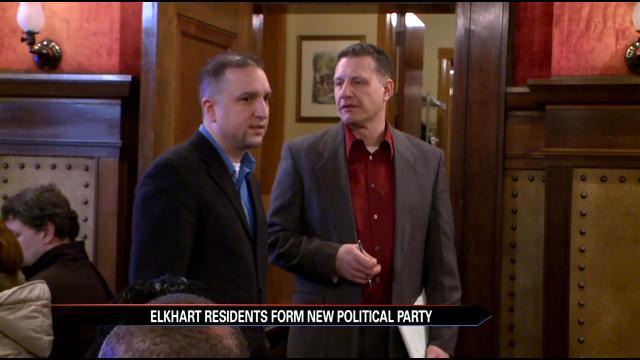 Some Elkhart residents have formed a new political party called the Elkhart Party. The party currently has three candidates running for city council at large.

The party's name matches their mission statement of putting the interest of the city as a whole over political affiliations.

“This is about the formation of a new political party in the city of Elkhart. This is about a third option for individuals who feel for what ever reason that the existing two options aren't an appropriate fit for them,” says Jason Moreno, a member of the Elkhart Party and a city council at large candidate.

Moreno grew up in Elkhart and is now standing up for a change in the city he calls home.

“Too many people feel that there is no hope in participation anymore and that their voice isn't being heard. If we are going to have an agenda we are going to get that agenda out front and create mechanisms for them to create feedback,” says Moreno.

Moreno believes new conversations with people who have been left out of the political discussion will prompt change.

Tom Butler, another member of the Elkhart party, says younger generations in Elkhart don't seem to be motivated by the current situation in the city.

“I think we really need to focus on the young people and help get ideas from them and give them hope that their future is going to be bright and vibrant and it will be if we can focus on new ideas and innovation,” says Butler.

Rose Rivera is also a member of the Elkhart Party.

“The Washington Gardens situation really motivates me. We need to find a way to not concentrate poverty so that people have access to grocery stores and fellow neighbors that have jobs,” says Rivera.

All the candidates have different issues motivating them to run, but say this party stands uniform on one topic.

“Elkhart needs candidates that are open to listening to each other,” says Rivera.

“We need to converse with each other,” says Butler.

Moreno says the Elkhart Party is talking to the Indiana election division in Indianapolis and the County Clerks in Elkhart to formalize and make sure the party is on the ballot for this next election in May.
Share this article: