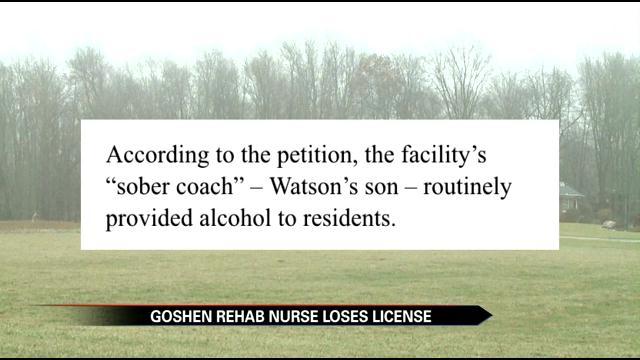 A Goshen nurse and some of her family members are being accused of pushing prescription drugs and alcohol onto patients who were trying to get sober.

Now that nurse's license has been suspended for three months while she's investigated further.

The Indiana State Board of Nursing voted to approve an emergency suspension of Rose Watson's nursing license at its hearing in Indianapolis on Thursday.

Watson was listed as the owner of a drug rehabilitation facility in Goshen called New Day Home, which is accused of operating illegally and jeopardizing residents' health and safety.

The Indiana Attorney General's Office called for the emergency suspension after receiving complaints from family members of two former residents.

According to Watson, New Day is now no longer in operation but since 2009 it had been advertising itself as a drug rehab and addiction treatment center that had expert staff on site.

By state law, a facility such as this must have the appropriate staff.

The investigation also found that New Day Home had never been certified by the Indiana State Department of Health as an in-patient facility.

And there are even more allegations.

According to the petition, the facility's “sober coach,” who is also Watson's son, routinely provided alcohol to residents. Watson's daughter and grandson are accused of giving medications to residents. Neither the daughter nor grandson holds a health-care provider license.

Watson is also accused of offering residents antidepressants and other prescription drugs that had not been prescribed by a doctor.

“The information uncovered in this investigation clearly posed an immediate danger to the health and safety of the residents who believed they would receive appropriate addiction counseling and help on the road to recovery,” Attorney General Greg Zoeller said.

Watson's nursing license will be suspended for 90 days while the Attorney General's Office completes a formal licensing complaint. Once a complaint is filed, the board could take disciplinary action.

Watson said she retired and that's why she shut down the New Day Home facility.

Others with information to report about New Day Home are encouraged to contact the Attorney General's Office at 1-800-382-5516.
Share this article: