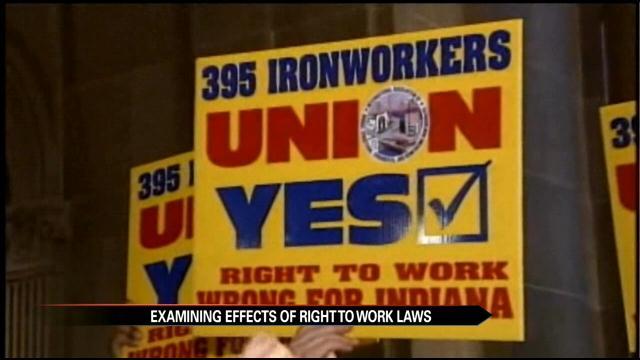 Wisconsin Governor Scott Walker is set to make Wisconsin the 25th state with a right-to-work law. That would make it the third Midwest state in the last three years to do so, joining Indiana and Michigan.

People on both sides of the issue are looking right in our area to predict how it would play out in Wisconsin.

Right to work laws in Indiana and Michigan prevent unions from forcing their members to pay dues.

Supporters of these laws argue that they protect workers' rights and create a more welcoming economy to attract businesses.

But union advocates say the law creates an unfair system where only some workers pay dues, yet all their co-workers benefit.

They also fear that if too many members don't pay, unions won't be able to sustain themselves.

Both states have had experiences to backup both sides.

According to the Department of Labor, Michigan has seen a decline in union membership.

In 2013 the state had over 16 percent of its workforce unionized. A full year after right to work, that dropped down to a little more than 14 percent.

One union, the SEIU, says they lost about 80 percent of their members. That's more than 44,000 home based caregivers.

However, the state of Indiana may provide some evidence as to how right-to-work could be successful.

The Hoosier state was at its lowest point in 24 years for union membership when right-to-work was in full effect in 2013. But union membership has actually ticked upward from 9 percent to almost 11 percent in Indiana.

The Indiana Economic Development Commission says companies cited it as factor in their decision to locate or expand in the state. They say more than 10,000 new jobs have come from these companies.