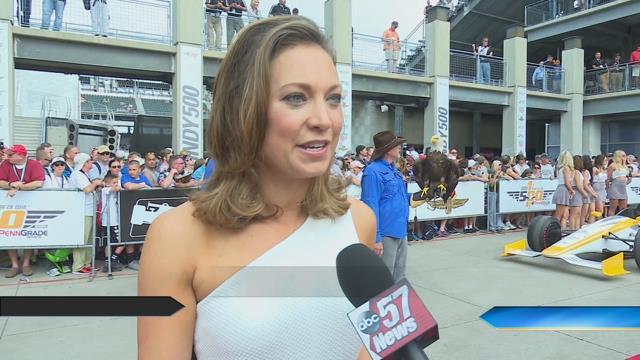 The 100th running of the Indianapolis 500 is officially over. Alexander Rossi is this year’s winner after a whirlwind race.

We spoke with some Indiana and Indy 500 legends on the red carpet who were just as excited as all the fans we spoke with over the weekend.

“I’ve never been to the Indy 500, so to come on this day, on this historic day, it feels so special,” said Ginger Zee, Good Morning America Chief Meteorologist.

With good morning America’s Ginger Zee hosting, the red carpet for the Indy 500 kicked off before the big race.

“This is probably my 25th time coming to the race, I grew up in Bloomington,” David Anspaugh and Angelo Pizzo, both IU Hoosiers.

“Everybody knows the Indy 500 is big, but when you live here, like, you realize there’s no bigger stage than to be able to be out here doing this,” said Josh Kaufman, Season 6 Winner of ‘The Voice’.

The stage was set Sunday morning as some stars joined fans at the speedway to celebrate the 100th running of racing’s greatest spectacle.

“I don’t remember it being this exciting over the years. For some reason, it’s all culminating to this anniversary,” Mario Andretti, 1969 Indy 500 Champion.

“There’s no other race in the world like this race here today,” said Angelo Pizzo.

Indy resident and season six winner of the voice Josh Kaufman returned this year to sing ‘back home again in Indiana.’

“I sang the anthem here two years ago and yeah, it was huge then, but it definitely feels like it’s a little bit bigger this time,” said Kaufman.

And Hoosier legends like David Anspaugh and Angelo Pizzo were on hand.

“I’ve never missed a race either on radio, television or being here since my earliest memory,” said Anspaugh.

The carpet was filled with its own spectacle even honoring a group of survivors from the Pearl Harbor attack.

Nearly every guest we spoke with on the carpet used one word to describe the atmosphere.

“There’s a lot of tradition on so many levels,” said Anspaugh.

“Tradition, you know. 100 years, you know? It’s the oldest motor race in the planet and proudly so. It’s maintained status right from the beginning,” said Mario Andretti, the 1969 Indy 500 Champion.

“I think with an event like this, that’s gone on for so long, tradition is huge,” said Kaufman.

“I think the tradition is so important. This is such a special thing for Indiana and America! So, to be a part of that, I mean all over the world, I love it,” said Henderson.