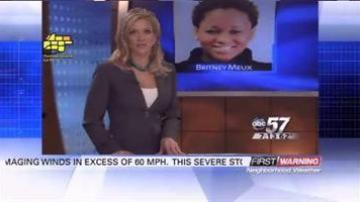 HAMMOND, Ind. -- A northwest Indiana corrections officer killed by a hit-and-run driver was honored with a police funeral on Monday.

25-year-old Britney Meux died last week when investigators saif the driver of an SUV plowed into her and three of her colleagues as they jogged near the Lake County Jail Complex in Crown Point.

"Our department right now, we're still hurting right now, but we're trying to get through. It has made us a closer tight-knit family," said Niecey Gore of Lake County.

Police said that 42-year-old Jason Cozmanoff struck the group with his SUV and then drove off.

He eventually turned himself into authorities.