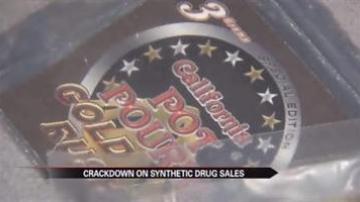 INDIANAPOLIS -- The State of Indiana announced that it is going to start cracking down on retailers that sell illegal synthetic drugs.

Some of these drugs are known as K2 and Spice.

It is against the law to have them on store shelves.

But authorities say retailers are selling them under new names and with different chemicals to avoid detection and penalties.

The state attorney general says stores that are caught could lose their business licenses.