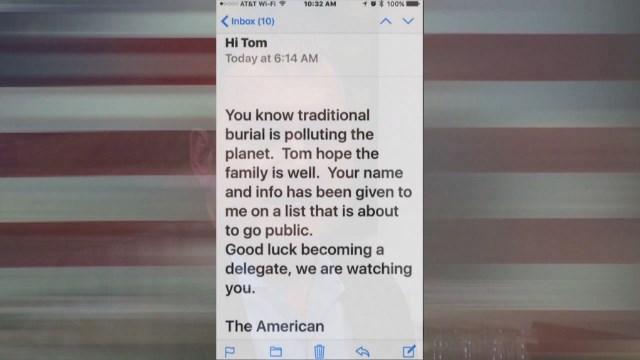 INDIANAPOLIS (WRTV/ABC News) -- Some of Indiana's GOP delegates say they have been receiving threats from Donald Trump supporters.

He says he received an email that concerned him over the weekend.

"Hope the family is well. Your name and info has been given to me – on a list that is about to go public. Good luck becoming a delegate. We are watching you."

"They have been very spooky, very personal, referencing things about my family, about things I have said on social media," John said. "One of my colleagues, they referenced home renovations."

John says he's heard of a half-dozen other delegates who have received threatening messages – supposedly from supporters of Donald Trump.

The threats come after John was quoted in a Politico article alleging he and other Republican delegates are lining up against Trump.

John says support for Trump hasn't played a role in any discussions he's been involved in.

"We are looking for people who are known quantities to the parties, and known thoughtful people, who can go and when those hard decisions are being made, people who Hoosiers can trust to do the right thing by our state and by our country," John said.

Representatives for Trump's campaign in Indiana denounced the threats, saying they are not affiliated with the official organization.

"It's deplorable. We condemn it," said Trump Indiana Campaign Vice Chairman Tony Samuel. "There should be no types of threats or intimidation. The best type of thing for Trump supporters to do if they disagree with what might be happening with some members of the state Republican Party is get out and vote on May 3."

Indiana State Police are not investigating the threats because they do not rise to the criminal level, according to an update from WRTV.