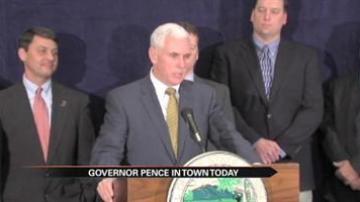 Governor Pence is listed as the keynote speaker at the South Bend Rotary Club's Luncheon. The club's website states that the governor will give his State of the State update at the event.

The luncheon is set to begin at noon in the Century Center's Great Hall on St. Joseph Street.

The governor is also scheduled to make another stop to Trinity School at Greenlawn during his trip.

Trinity is a small, private, Christian institution that's been a part of South Bend for over 3 decades.

Governor Pence is expected to appear and congratulate the school for becoming the first Indiana institution to receive four U.S. Department of Education Blue Ribbon Awards. The Blue Ribbon Awards are widely considered the highest academic honor an American school can receive.

Trinity is only the ninth high school to receive the award four times.