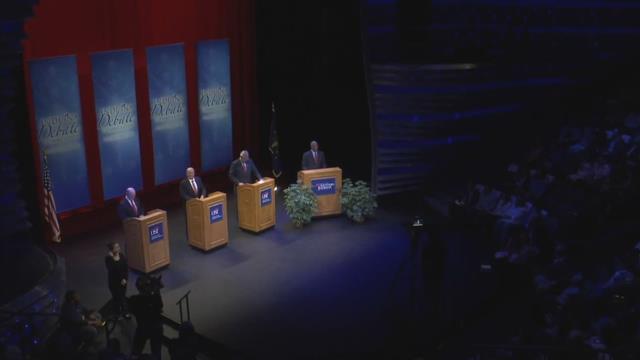 Candidates for Indiana governor took to the stage Tuesday night, giving voters one of their last chances to hear from the candidates on the issues.

This debate was all about health and social issues, something the candidates had plenty disagreements on.

One of those things is abortion. Republican Eric Holcomb, Democrat John Gregg, and libertarian Rex Bell discussed their viewpoints on the controversial topic. Gregg described himself as a pro-life democrat. But doesn't believe the government should be involved. Holcomb said he was pro-life as well.

Holcomb and Gregg were asked about marijuana legalization. Gregg expressed support for medical marijuana. Holcomb said he needs to see more research and does not support.

But the state's growing heroin epidemic brought both candidates together. Both say the state needs to do more, and they each touted their proposals to conquer it.

"We need to continue to explore every way we can to not just solve the problem for one community, but to kill the whole drug epidemic itself," said Holcomb.

"The truth of the matter is we have got to change the way we look at drugs," said Gregg. "We need to realize this is a medical issue."

Then the discussion moved to an issue many people in Indiana have an opinion on- Sunday alcohol sales. Gregg says he'd be open to them.

"I think if the legislature sent me a bill to allow Sunday sales I would very likely sign it," said Gregg.

Holcomb disagreed, saying the state should do more to support excise police.

"I think alcohol is a legally controlled substance in Indiana and we need to make sure we are able to do that," said Holcomb.

Holcomb and Gregg are in a tight race, with some polls showing Gregg on top.