Indiana man accused of throwing his baby across a room 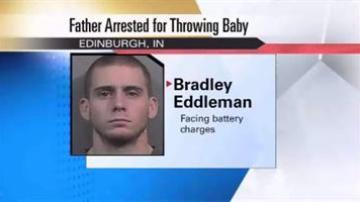 EDINBURGH, Ind. -- An Indiana man has been accused of throwing his six-week old baby across the room.

The baby suffered a fractured a skull from the incident.

Bradley Kyle Eddleman, 23, and his wife took the infant to the hospital. The baby was later airlifted to Riley Hospital.

Eddleman originally told police his daughter slipped out of his arms and hit head on her car seat.

Then he later admitted that he was angry that his daughter would not stop crying. So he threw her across their living room.

Eddleman said he did not take her to the hospital until nine hours after the incident because he did not want to go to jail. He has since been arrested on preliminary charges of battery.