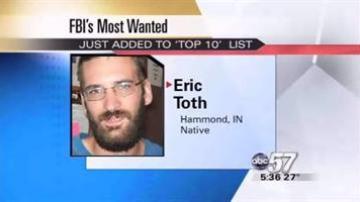 The newest face of the FBI’s "Ten Most Wanted Fugitives" list is an Indiana native.

The FBI said Toth was a third grade teacher at an elementary school in DC and another teacher found sexually explicit pictures on a school camera he had.

"These are some very dangerous foes and we believe he is one of those, he's a clear and present danger to your children,” said Ronald Hosko, special agent of the FBI’s Washington field office.

Toth has been on the run since 2008. The FBI said that time he's visited his parents in Hammond and his car was found at the Minneapolis-Saint Paul International Airport.