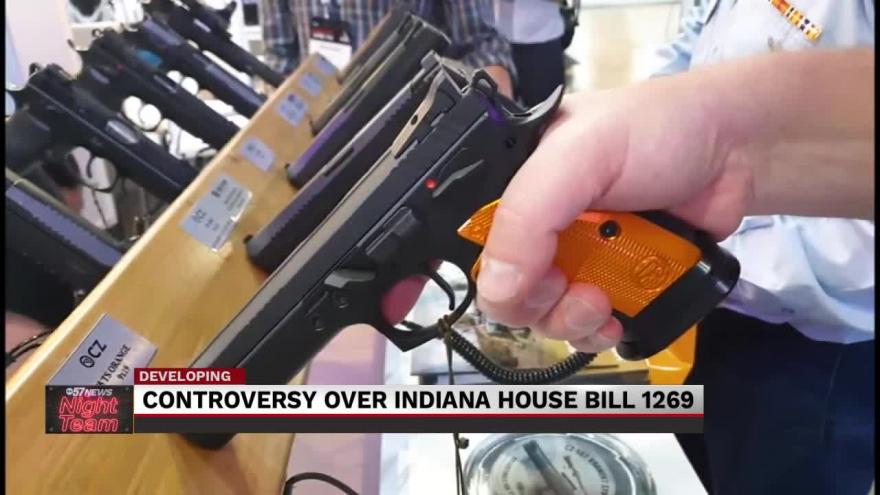 SOUTH BEND, Ind. -- Indiana House Bill 1296 has hit the desk of Governor Eric Holcomb. If passed, the bill would make it legal for any Indiana gun owner to carry a concealed handgun without needing a permit-- a move that has some law enforcement officers up in arms.

“This is what happens when extreme partisanship and a supermajority gets ahead of itself and puts extreme ideology over the community’s best interests," said South Bend Mayor James Mueller, speaking out against the bill.

Indiana Representative Jake Teshka-- one of the bill's co-authors-- said the bill was created in response to longer and longer wait times for gun owners to get their permits.

“This is a constitutional right—the right to keep and bear arms, and that is primarily for self-defense," said Teshka.

Some are calling for the bill to be vetoed, including Mayor Mueller, who sees the bill as a challenge for law enforcement: taking away permits takes away one of the tools officers can use to prevent gun crimes.

“They’re prioritizing the inconvenience of filing for a permit to have a concealed firearm versus taking away the ability of our officers to get illegal guns and violent offenders of the street," he said. "It will have a real impact right here at home. We’ll adjust as best as possible and we’ll continue to evolve our strategy, but it will be a setback for us.”

Mueller echoed the calls of some law enforcement officers-- including South Bend Police Chief Scott Ruszkowski, who wrote a letter condemning the legislation.

But Teshka argued that data from other states with lawful-carry laws on their books show no increase in crime rates.

“We typically see a flatlining on that, specifically in homicides perpetrated with a handgun," Teshka said. "The folks that are committing gun crimes on the streets of South Bend are not applying for permits, and so to assume that gun crimes are going to go up because of this is somewhat of a leap of logic.”

However, data from a recent study posted by CNN showed that states with "weaker" gun laws tend to see more homicides and suicides. Teshka noted that while there are upticks-- he said it's indicative of social problems that need to be addressed through appropriate programs.

While Mueller agreed that social programs are needed to stop violent crimes-- he said that taking away gun permits is not part of the solution.

“We need to be taking steps forward, not steps backward," he said. "Like this move from the state legislature.”

If passed, Indiana would be the twenty-second state with a lawful-carry law on the books-- and the twentieth since 2012.