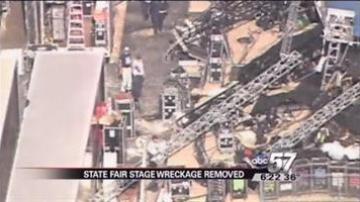 Investigators plan to reassemble the debris at an Indianapolis warehouse. High winds toppled the temporary stage just minutes before a Sugarland concert.

Seven people died and dozens more were hurt, including a Mishawaka woman. Monday is the deadline for victims to file a claim.