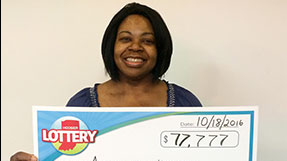 One Indianapolis woman rushed to Hoosier Lottery headquarters after realizing she won the top prize, 77,777 on a scratch off ticket.

Representatives at the Hoosier Lottery said Angelique Hibbler bought a five dollar Gold 7s ticket before she saw what she won.

They said Hibbler was at Hoosier Lottery headquarters in Indianapolis claiming her prize just an hour after she bought the ticket from the Speedway at 401 Kentucky Avenue in Indianapolis. At that point, only two friends knew about her win.

Representatives say she was still processing what the win would mean to her.

"It means a ton," Hibbler said, adding it would give her some breathing room, while also allowing her to pay off debt and have fun.

Hibbler stopped at Speedway, bought the ticket and scratched it in her car before leaving the retailer.

She says she thought it was a joke saying, ‘where’s the camera’ after seeing she had won.