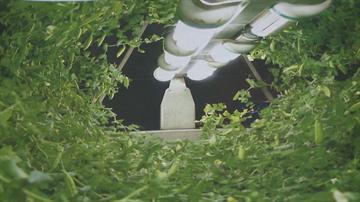 NEW BUFFALO, Mich. - The old Plastics Masters manufacturing facility on US-12 in New Buffalo will soon be getting new life. The building’s new tenants could have an effect on farming in the United States.

The new buffalo township commission just gave its blessing to Fountain Head Engineering in New Buffalo to turn the defunct facility into a 50 thousand square foot indoor farm.
“It was vacant for about six or seven years,” says Milan Kluko, owner of Fountainhead Engineering. He is outside an unlikely spot to house the future of agriculture. The roots are already in place to turn the building into a completely sustainable, year-round, vertical-farming operation.
“Now we’re able to provide an agricultural skill in an urban environment,” says Kluko. He’s been in the green engineering business since the 1990s. His new indoor farm will soon be growing and harvesting thousands of plants every year.
He says New Buffalo is just about the optimal spot. “As the wind comes in we’re capturing it as it comes off the lake,” he says. Plans are to build a wind farm on site and line the top of the building with solar panels. It will be completely sustainable without using electricity from the grid.
Inside, hydroponics will grow a variety of organic crops from the floor to the ceiling. Many types of fruits and vegetables will be grown that are usually shipped to the United States from around the globe.
Kluko says there will be little-to-no shipping costs associated with the farming. “We’re moving the food source closer to where the population is so that saves money, saves energy and you’re providing green collar jobs.”
Kluko says at full operation; it’ll provide 45 jobs.
Kluko says similar operations are being tried in different countries. With fuel prices high and a growing population to feed, the New Buffalo model could lay the groundwork for the new farming generation. “I think in the next ten years, (with) vertical farming, we’ll look back and say it was so simple to do,” says Kluko.

New Buffalo could have their first beta-harvest by June 1st, 2012.