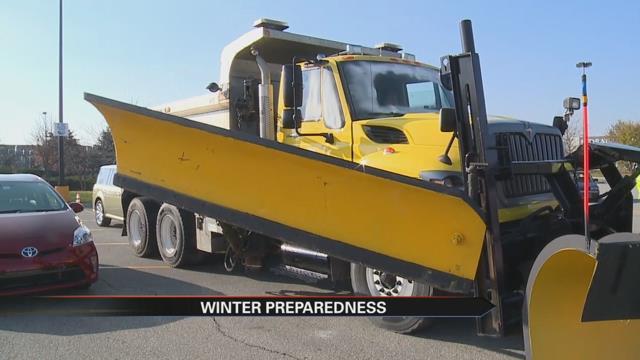 As part of “Winter Preparedness Week” in northern Indiana, INDOT held an event in Mishawaka Tuesday to encourage safe driving around snowplows.

A simulation was set up in the parking lot of Mishawaka’s Walmart Tuesday morning, complete with plows, nearby drivers, and frosted windows.

“Don’t Crowd the Plow” is one of the Indiana Department of Transportation’s ways to connect plow operators with the drivers they serve, to ensure a safe winter season.

“There are a lot of maneuvers that we have to do to clear the road,” longtime INDOT plow driver Amy Stanley said. “Quick stops. We’re clearing shoulders. We’re doing turn lanes. So we need to be able to have the space in order to do those maneuvers safely.”

Members of the public were able to take a seat behind the wheel of a big yellow plow at the event.

The goal was to offer front row access in an effort to improve understanding.

INDOT says you should stay 100-200 feet behind a working snowplow – about four or five car lengths away.

And you should not pass a working plow, because the driver cannot always see you, and INDOT often uses extension plows that protrude from the side of the truck.

It is safest to stay far behind the plow, according to INDOT.

“I want to remind all the people, when they’re out there driving, to give way to these plow truck drivers because it’s very, very difficult for them,” event attendee Dave Kowalski said. “You can see them real easily and always yield to the plow drivers.”

In addition to plowing, INDOT says it’s actually “at capacity” with salt ahead of the winter season.

The department is also building some salt surpluses throughout the state, so if we start running low here in Michiana throughout the winter, relief is not too far away.