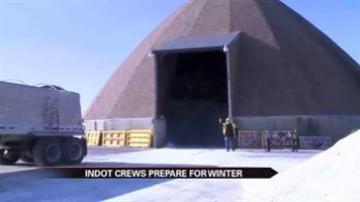 LAPORTE COUNTY, Ind. -- The Indiana Department of Transportation received several tons of salt Wednesday in preparation for snow this winter.

"We've been getting ready for winter prep for months and months before this,” said Matt Deitchley, INDOT LaPorte District spokesman.

How does all that salt end up there?

One at a time the trucks backed up to the dome’s entrance and lifted their beds in the air.

After the truck is emptied, a backhoe moves the salt.

This delivery is actually smaller than normal for this time of year because last year's winter wasn't so bad.

"Last winter was so mild we didn't use nearly as much as we normally do so we're actually about 14,000 tons less salt we need this year,” said Deitchley.

Whether these plows will battle flurries or full-fledged snow this year, INDOT says it has been working on its plan of attack for months.

The people who will maneuver these trucks have already been through a class and even had to pass an obstacle course.

"Whether they've been plowing for 25 years or this is their first year they have to make it through this course or they can't plow,” said Deitchley.

This dome is one of the last piles that needed filled up across northwest Indiana before winter really hits.

Now it and the dozens of other sites just like it are waiting to load the salt back up and hit the road.

"There's a whole lot of salt out there ready to go and the good thing sis with this delivery we're just about prepared for the rest of the season,” said Deitchley.