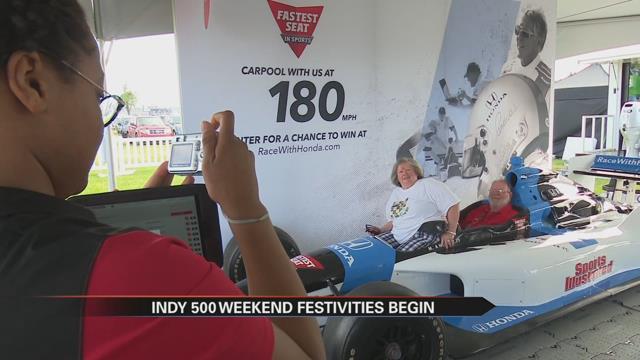 Friday was Carb Day at the Indianapolis Motor Speedway. The 100th running of the Indy 500 is Sunday.

Among the thousands of fans at the track on Friday, ABC57 caught up with a few from Michiana.

“You come for the atmosphere. You know, you can see it better on TV! But, this is the atmosphere and I’m loving this," said Dawn McCallum, a South Bend native.

This is McCallum and her father's first Indy 500.

Emotional because their trip to the 500 is a homecoming.

The father-daughter team lived in South Bend before Lukens' job moved the family to Florida years ago, but this year’s 100th running of the 500 brought them back.

“Left my family at home to be with my dad, so I’m just, I’m so happy to be here," said McCallum.

Their story is one of many here at the speedway – where hundreds of thousands of fans and families are gathering for the Greatest Spectacle in Racing.
“The noise, the speed of the cars. It’s just, it’s the month of May. I grew up in Indiana. It’s like a rite of passage, I guess," said John Veach, who works at the Notre Dame stadium.

Carb Day kicks off a weekend of fun.

“I missed one in 15 years because my daughter was two weeks old," said Nick Chevrie of South Bend.

After the race Sunday, McCallum and Lukens will head up to South Bend to meet up with family members they haven't seen in a few years.