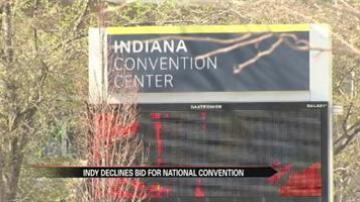 INDIANAPOLIS -- Indianapolis is making headlines for turning down the chance to host the Democratic National Convention.

City leaders declined the invitation to bid for the event.

The city says their hands are tied in 2016 having already agreed to host the women's Olympic trials and the men's final four tournament.

There is also no hope of Indy hosting the GOP National Convention because GOP organizers narrowed down their list and Indy is not on it.