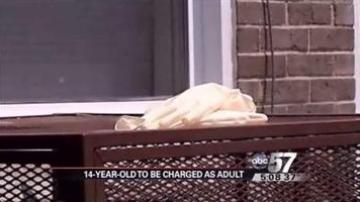 INDIANAPOLIS, Ind. -- New details have developed on a crime that horrified an Indianapolis community.

Police say a 14-year-old girl is responsible for fatally stabbing her own 4-year-old cousin.

Leon Thomas III was found bleeding from stab wounds Saturday at an Indy apartment. He later died at the hospital.

Police say they found the teen covered in blood and walking along a nearby street. The prosecutor's office decided to file adult murder charges against the girl Wednesday.

They added this is a very rare move.