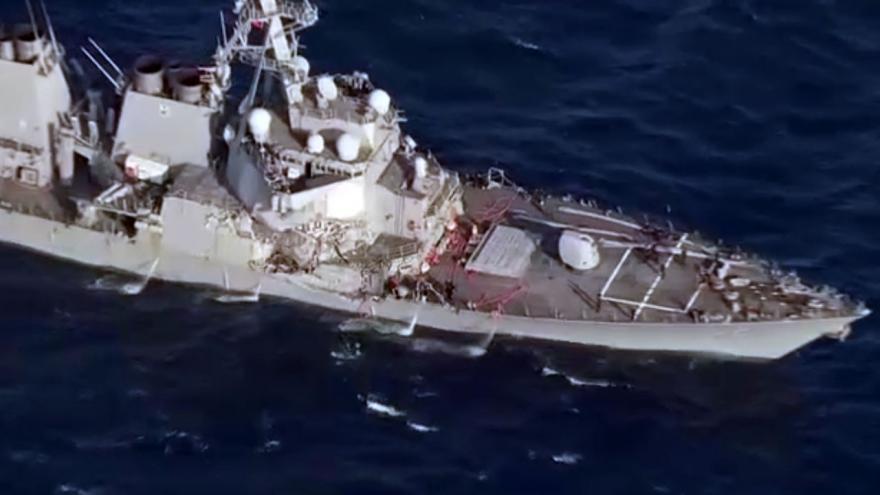 (CNN) -- Preliminary findings in the investigation into the collision between the USS Fitzgerald and a Philippine cargo ship off the coast of Japan in June suggest the accident was caused by multiple errors by the Fitzgerald's crew and a failure to take action in the minutes leading to the collision, according to two defense officials.

"They did nothing until the last second," one official said. "A slew of things went wrong." A second official said the crash "will wind up being our (the US Navy's) fault."

The collision between the Fitzgerald, a guided-missile destroyer, and the ACX Crystal on June 17 claimed the lives of seven US sailors. It took place 56 nautical miles off the coast of Honshu, Japan, in an area heavily traveled by commercial shipping.

The initial findings are just the first stage in what is expected to be a lengthy inquiry. Both officials said the initial investigation found that the Fitzgerald crew failed to understand and acknowledge the cargo ship was approaching and failed to take any action necessary to avoid the collision. It's also not clear if the crew ever called the commanding officer to come to the bridge.

The officials say investigators are also looking at the possibility that the ship was traveling at a higher speed than expected to reach a location it was due to arrive at the next day.

The preliminary findings will now be reviewed by the 7th Fleet commander, Vice Adm. Joseph Aucoin, even as the investigation continues and they are likely to lead to recommendations about potential punishment.

The ongoing investigation is known inside the Navy as a "dual purpose" review, meaning it is both fact finding and will address the accountability of various service members. In addition to the US Navy, the US Coast Guard and Japanese naval and maritime authorities are all conducting investigations.

The Navy issued a statement from Rear Admiral Dawn Cutler, US Navy chief of information, responding to CNN's reporting on Friday: "We are in the early stages of the investigation process to develop a comprehensive picture of what caused the collision and do not have any definitive information to release at this time. It is premature to speculate on causation or any other issues. Once we have a detailed understanding of the facts and circumstances, we will share those findings with the Fitzgerald families, our congressional oversight committees and the general public."

The two ships collided on the Fitzgerald's starboard side directly next to the berthing area, where sailors sleep. The impact ripped the Fitzgerald open and caused water to pour in. Top Navy officials have said since the beginning that the catastrophe could have been even worse, with the possibility the ship potentially could have sunk with the crew on board.

"Heroic efforts prevented the flooding from catastrophically spreading which could have caused the ship to founder or sink," Aucoin said at a press conference the day after the collision.

Photos released by the Navy show extensive damage below the water line on the starboard side where the ship was hit.

The ship's commander, Bryce Benson, was so badly injured that once freed he had to be medevaced off the ship by the Japanese Coast Guard.