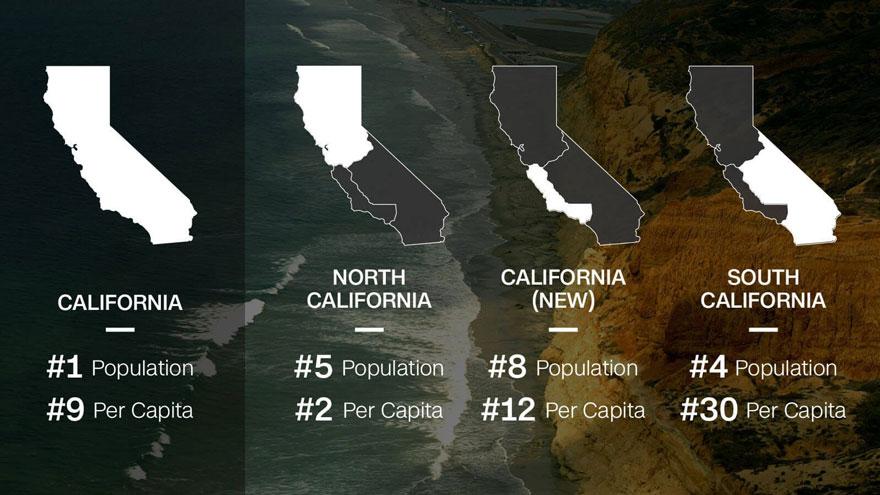 (CNN) -- An initiative that would divide California into three separate states qualified Tuesday to appear on the ballot in November's general election.

The proposal by venture capitalist, Tim Draper to break up California in a campaign called "Cal 3," received more than 402,468 valid signatures -- surpassing the amount required by state law.

California Secretary of State Alex Padilla will certify the initiative as qualified for the November 6th ballot on June 28.

The reasons for wanting to split California up?

Draper has said that partitioning California into three states would allow regional communities to make better and more sensible decisions for their citizens to address the state's most pressing issues, including the school systems, high taxes, deteriorating infrastructure and strained government.

"The California state government isn't too big to fail, because it is already failing its citizens in so many crucial ways," Citizens for Cal 3 campaign spokeswoman Peggy Grande said in a Tuesday statement. "The reality is that for an overmatched, overstretched and overwrought state-government structure, it is too big to succeed. Californians deserve a better future."

"It will simply divide the state into smaller, more manageable populations. Think of North Carolina and South Carolina; North Dakota and South Dakota; West Virginia and Virginia -- California is already known for its Northern and Southern identities," according to the Cal 3 website.

But critics have slammed the partition effort as a distraction and say that breaking up the state would cost billions of tax dollars.

Under the proposal, each state would have about 12.3 million to 13.9 million people.

Northern California- This would include 40 counties including the San Francisco Bay Area and the remaining counties north of Sacramento.

What are the chances of this happening?

If the measure is approved by voters, the governor will transfer the notice of state approval to Congress, which will vote to ratify the creation of the new three-state structure.

Constitutional lawyer and professor Jonathan Turley had told CNN that congressional approval is not impossible, but not likely to happen, as Democrats could feel they have too much to lose.

California gets 55 electors in the Electoral College -- a powerful number that has been a huge unmovable bloc for the Democratic candidate. Three smaller states would change that equation, which could make a lot of Democrats just as nervous as the idea of four new senators would make Republicans nervous.

Cal 3 sees this as an advantage: "Electoral College votes will be divided among the new states based on population, roughly the same as they are apportioned today, but with the additional recognition that comes with more direct and proportional influence over the Electoral College totals."

It says that the California states will have more of the region's influence within the federal government with more seats in the US Senate.

A CNN analysis in April found that even if California split into three states, it would still be underrepresented in the Senate compared with most of the US.

California is rife with ideas on separation and secession

This isn't the first time that Draper attempted to get an initiative to break apart the most populous state. He backed a proposal to turn California into six states in 2014 but it failed to get the required number of signatures to qualify and the measure was not presented to voters.

Last year, an effort dubbed Calexit sought to bring the question of whether California should secede from the US to this year's ballot. But the Russia-based leader of that campaign backed off.

Plenty of ideas about splintering California into smaller states have popped up -- including an effort by rural, more conservative northern counties that seek to break away to become "State of Jefferson." Another group proposes the creation of another state called New California, comprising mostly inland counties, over grievances of high-state taxes, regulation and single party politics.

While proposals about separating California have been bandied about for years, Golden State voters will have their say on this particular initiative in November.