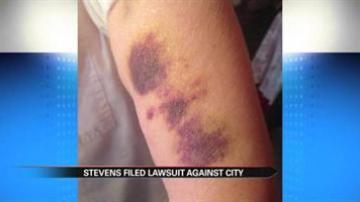 SOUTH BEND, Ind. -- Thomas Stevens has filed a notice with the city of South Bend that he plans to sue for damages. Stevens was injured during his arrest in March 2014.

In March, Stevens was driving down a residential street with his lights off when Officer Aaron Knepper attempted to pull him over.

Stevens drove a short distance away and ran towards his home.

While attempting to arrest Stevens, Knepper and Stevens got into a physical altercation.

The St. Joseph County Prosecutor's Office reviewed the case and decided Steven's injuries were not caused by excessive force by a police officer.

Stevens was hospitalized and was put in a medically induced coma.

Stevens' attorney says he didn't have insurance at the time of the incident.

The police department's internal affairs and risk management are looking into officer Knepper's actions now that the criminal investigation is over.


His trial date has not been set.

His mom was also charged with resisting law enforcement (misdemeanor).