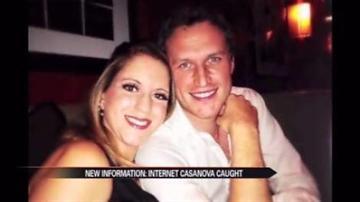 MISHAWAKA, Ind. -- The man accused of being the ‘Internet Casanova’ has been charged with the theft of a Mishawaka woman’s camera. Raymond Holycross, of Plymouth, is accused of meeting women on internet dating sites, then stealing expensive items from them.

Theresa Bridegroom of Mishawaka hasn't been getting much sleep this week.

"It was like 3:30 in the morning I was answering texts and emails,” said Bridegroom.

She says she was busy filling in the other women who she just discovered were romantically involved with Ray Holycross.

"I was up all night just trying to get in contact with these people because I didn't know if he was going to get out of jail,” said Bridegroom.

Holycross is behind bars in St Joseph County on a warrant out of Howard County, Indiana, for theft. He is accused of stealing an ex-girlfriend’s gun and electronics.

Officers arrested Holycross at Bridegroom's apartment on Tuesday after she discovered he pawned her camera and she turned him in.

Bridegroom says she knows at least one other victim she spoke to contacted Mishawaka Police.

But police aren't saying much.

"There are active cases that are being investigated right now, What they are we can't comment on since they are active ongoing,” said Lieutenant Tim Williams of the Mishawaka Police Department.

Lieutenant Micheal Budreau with the Medford Oregon Police Department confirmed by phone that Holycross is wanted on two counts stemming from an identity theft charge.

They hope the FBI will get involved now because of the multiple jurisdictions investigating the 29-year old suspect for similar crimes across the country.

"How many years this has went on and he hasn't been caught and I thought this is my chance you know I wasn't going to screw this up,” said Bridegroom.

Bridegroom said detectives were back at her apartment on Thursday to get a laptop and iPhone Holycross used.

The St. Joseph County Prosecutor’s Office has filed a theft charge against Holycross for the theft of Bridegroom’s camera. He will be arraigned on Friday.