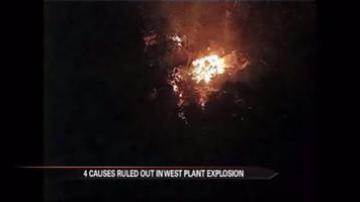 WEST, Texas — Investigators are getting closer to figuring out what caused last month's deadly explosion at a fertilizer plant in Texas.

Fourteen people were killed and nearly 200 people were injured in the April 17 explosion at the plant in West, Texas. Numerous structures, including two schools and a nursing home, were damaged in that explosion.

The cause of the explosion has yet to be confirmed.

Officials have ruled out a few possibilities, including weather and ammonium nitrate.