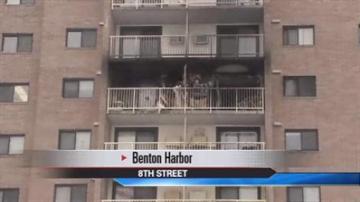 BENTON HARBOR, Mich. – The fire at a Benton Harbor senior apartment complex that happened Thursday night was arson, according to the Benton Harbor Department of Public Safety.

After the fire was brought under control, the preliminary fire investigation revealed the fire was possibly caused by arson, according to reports.

The fire destroyed one sixth floor apartment and damaged five others.

Thursday night, residents helped each other get out of the building.

During the fire, the elevator refused to pass beyond the tenth floor. Residents, like John Calvin Morris, helped firefighters evacuate the elderly and disabled residents.

Morris was close friends with the residents whose apartments were damaged by smoke and water.

"Anybody would be upset about their things and I guess a few of them didn't have any insurance, so that's kind of rough because nobody's covering nothing for them," said Morris.

The American Red Cross is assisting the residents who lost everything.

"We'll take care of him for the first three days to help them get back on their feet. We'll make sure that they have shelter, food and clothing,” said volunteer Connie Kepner of the American Red Cross.

Those residents whose units were damaged are staying in vacant units.

"We have placed them in other units we had available/vacant to put them in for now and they will return to their original units once we get them fixed up,” said Steve Cook, Property Manager, Continental Management.