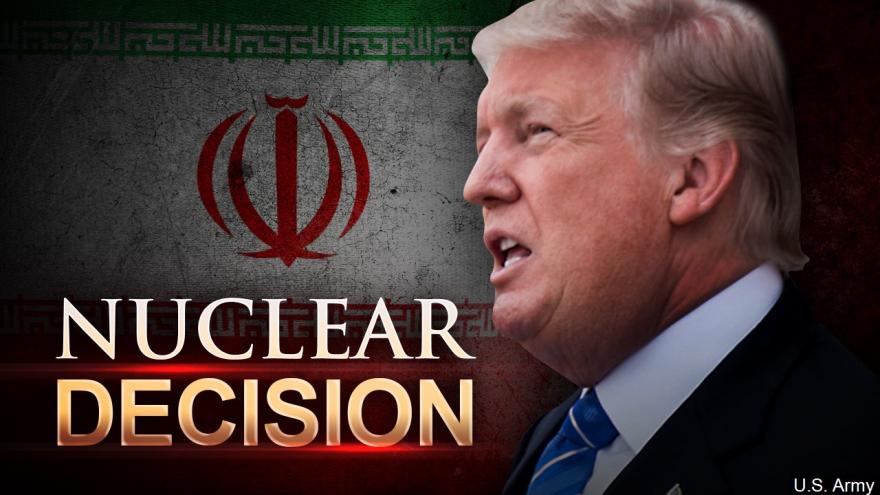 (CNN) -- President Donald Trump has used Iranian anti-government protests as an opportunity to slam the Iran nuclear deal ahead of key legal deadlines looming this month, actions that may foreshadow how he plans to proceed.

In mid-January, Trump will once again have to decide whether to certify Iran's compliance with the deal -- a process that must occur every 90 days according to the terms of the agreement.

The President also faces what is perhaps an even more significant deadline beginning on January 12, over whether to renew temporary waivers for US sanctions against Iran.

The renewal of those waivers -- which provide relief for US sanctions not set to expire for several years -- must occur every 120 days to keep the US a party to the deal and thus not violate the accord.

Trump waived the sanctions at the last deadline but has since decertified Iran's compliance with the nuclear agreement, raising questions about whether the US will continue to extend sanctions relief stemming from the deal with Iran.

Precedent suggests that Trump will renew the waivers this month, but nothing is certain, according to Behnam Ben Taleblu, a senior Iran analyst at the Foundation for Defense of Democracies, who noted that failing to do so could "send a message that the US is not keeping its terms of the deal."

White House press secretary Sarah Sanders said Tuesday that Trump has not yet made a decision on whether to sign a sanctions waiver later this month, but that the administration is keeping "our options open" as far as sanctions against Iran are concerned.

"We certainly keep our options open in terms of sanctions. In terms of signing a waiver later in January, the President hasn't made a final decision on that," Sanders said. "He's going to keep every option on the table."

A decision not to renew the waivers could be viewed by Iran and European allies of the US as a violation of the agreement and further derail any hopes of salvaging the deal.

Trump did not kill the nuclear deal in 2017, but he did choose to decertify Iran's compliance with the agreement in October -- declaring that the Obama-era pact was not in US interests as he unveiled a tough new policy toward the Islamic Republic.

He accused Iran of committing "multiple violations of the agreement," despite the fact that the International Atomic Energy Agency, America's European allies and even his own government said Tehran is complying with the 2015 deal.

At the time, Trump warned that he would unilaterally kill the deal if Congress and US allies failed to take steps toward strengthening it:

"In the event we are not able to reach a solution working with Congress and our allies, then the agreement will be terminated. It is under continuous review and our participation can be canceled by me as President at any time."

The administration has also said it is seeking new legislation through Congress to end the perpetual certification process every 90 days, but nothing has yet to come out of Capitol Hill on that front.

When Trump decided to decertify Iran's compliance he warned that the deal was plagued by "insufficient enforcement" and near total silence on the missile program.

"As I have said many times, the Iran deal was one of the worst and most one-sided transactions the United States has ever entered into," Trump said in a major speech at the White House last year.

The Obama administration deliberately excluded other deep disagreements with Iran from the deal, reasoning that its threat would be much worse if it were able to race to a nuclear weapon in a matter of months.

Lawmakers continue to discuss measures to address the concerns Trump outlined in October, according to a statement from the chairman of the Senate Foreign Relations Committee, Republican Sen. Bob Corker.

"Senator Corker remains engaged in productive discussions with the White House and a number of his colleagues in the Senate about the appropriate path forward, and our allies continue to be updated on relevant developments," Micah Johnson, a Corker spokesman, told CNN on Tuesday.

But Congress has failed to produce a solution despite ongoing discussions for nearly three months -- a factor that is raising questions about whether Trump might be inclined to follow through on his threat to scrap the deal as tensions continue to escalate between the US and Iran ahead of the two major deadlines related to the agreement.

Given Trump's decision on certification in October, Taleblu said he expects the President to once again decertify Iran's compliance with the agreement this month.

The recent protests in Iran have further complicated matters for Trump and his top advisers as the administration weighs options for increasing pressure on the regime.

"Even before protests, waiving and certifying were complex policy issues, but they have been compounded by events on the ground in Iran," Taleblu told CNN, adding that the administration will likely begin to incorporate such events as part of its equation on how to deal with the nuclear deal.