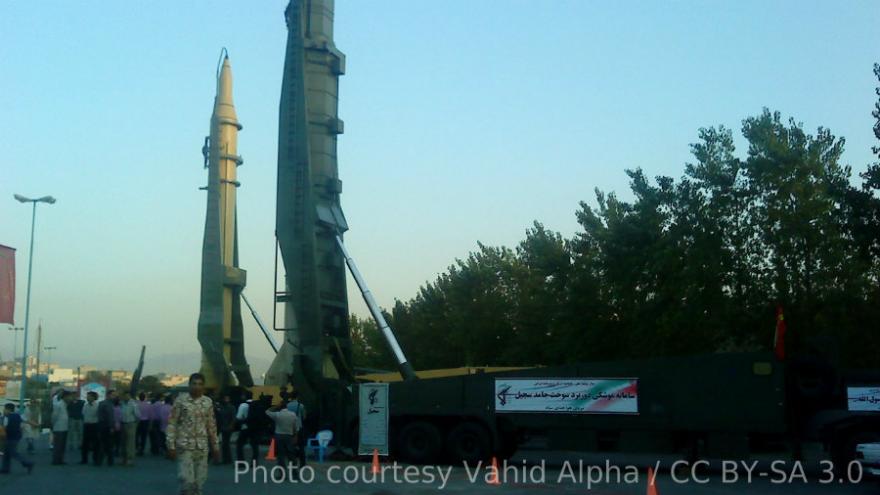 Iran unveiled the ballistic missile Friday at a military parade in Tehran and successfully tested it the same day, Press TV reported. It said Iran released footage of the test-launch.

Called the Khorramshahr missile, the weapon has a range of 1,250 miles (2,000 kilometers) and can carry multiple warheads, according to Press TV.

"The Khorramshahr missile has become smaller in size and more tactical and it will be operational in the near future," the broadcaster said.

The missile was launched from an unknown location.

With such a range, the missile would be easily capable of reaching Israel and Saudi Arabia.

"We will promote our defensive and military power as much as we deem necessary," Rouhani said. "We seek no one's permission to defend our land."

He added, "Whether you like it or not we are going to help Syria, Yemen and Palestine, and we will strengthen our missiles."

Rouhani said the United States and Israel have isolated themselves by opposing the 2015 nuclear agreement between Iran and the other major powers. He added that Iran remains fully committed to the pact, Press TV reported.

The United States extended sanctions relief for Iran last week as part of the agreement, which President Donald Trump has described as "the worst deal ever."

It was mainly a procedural move, but it was significant since reimposing nuclear-related sanctions could lead Iran to end its compliance with the deal and revert back to rapid uranium enrichment -- something it's threatened to do if the United States reneges.

The next major deadline comes in October when Trump will decide whether to certify that Iran is complying with the agreement, known as the Joint Comprehensive Plan of Action. If he does not, Congress has 60 days to decide whether to reimpose sanctions waived under the deal.

French President Emmanuel Macron on Tuesday said that although the 2015 Iran deal was not perfect, the international community should stick with it or risk facing another situation like North Korea.

In an interview with CNN, he called for a new agreement to monitor Iran's missile development.

"We have to work in order to have a monitoring process on the ballistic activity of Iran." he told CNN. "That is a concern for the whole region."

It's been known that Iran has had a missile with a range capable of reaching Israel, said Mark Fitzpatrick, executive director of the Institute for Internal Strategic Studies-Americas, a think tank.

What's new, he said, is that Iran says its ballistic missiles can carry multiple warheads and maybe several cluster bombs.

"It has the potential to carry nuclear warheads, but I am skeptical as to whether it can carry multiple ones because nuclear warheads are so large," said Fitzpatrick, who also heads the think tank's Non-Proliferation and Nuclear Policy Programme.

Fitzpatrick agrees it would be a good idea to extend the Iran nuclear deal to include ballistic missiles.

"But it is no good talking about this if the US is not honoring the nuclear agreement," he said.

Iran expert Sanam Vakil, an associate fellow with the UK's Chatham House, said that Rouhani was playing to both the international and domestic audience.

"On the one hand Iran is trying to demonstrate they are the pragmatic rational actor here and maintain unity among the other signatories of the nuclear agreement, even if from the US side it starts to unravel," Vakil told CNN.

"On the other (hand), domestic politics very much drives Iran's relationship with the US, and Rouhani has a big hard-line contingency among the country's elite who fear the US wants a regime change that he has to consider."