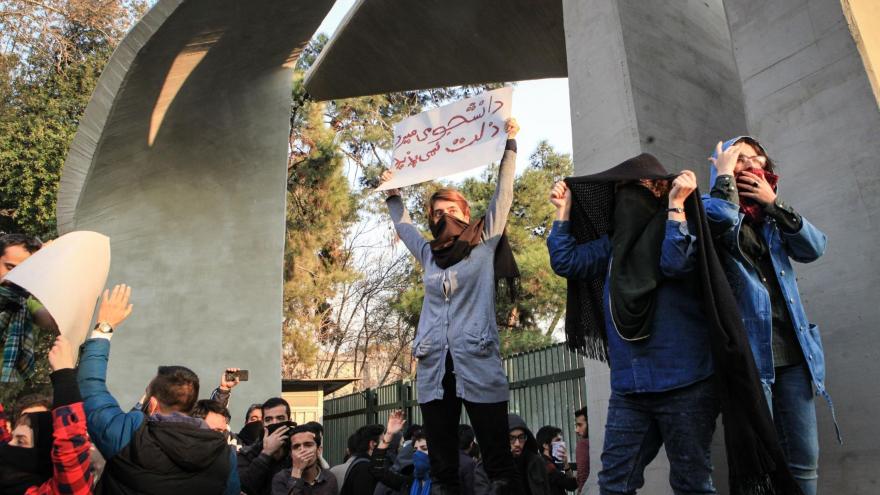 (CNN) -- Police in the Iranian capital, Tehran, have arrested 29 people for their involvement in protests against the country's compulsory headscarf law.

Women across Iran have been removing their headscarves in public to protest Iran's strict Islamic dress code. Videos and photos shared on social media have shown demonstrators standing on utility boxes on street sidewalks, defiantly waving their hijabs.

Tehran police suggested that their actions were incited by foreigners, saying those arrested were "deceived" into removing their hijabs, Iran's semiofficial Tasnim News Agency reported. The 29 protesters have been transferred to judicial authorities, the report said.

Masih Alinejad, the Iranian activist behind the "White Wednesday" social media campaign against mandatory hijabs, who is now based in the US, told CNN that the movement has not been influenced from abroad.

"The movement started inside Iran. It has nothing to do with forces outside of Iran," Alinejad said.

"This is a campaign that's been going on for years and years. The women of Iran have long been ignored. We're just giving them a platform."

News of the arrests came just days after the release of Vida Mohaved, a woman who was detained in December after removing her headscarf at an anti-regime protest.

The wave of anti-goverment demonstrations last month was sparked by concerns over rising living costs and a stagnant economy, but also provided an opening for Iranian women to push for equal rights. Women have been required to wear the hijab since the Islamic Revolution in 1979.

Mohaved attracted attention during the demonstrations when a video of her protesting went viral. The footage shows Mohaved waving her white hijab defiantly from the end of a pole, her black hair flowing uncovered.

In recent months, enforcement of the law banning the hijab has been relaxed. In the past, women who allowed their hijab to slip could be admonished by the religious police, but these forces have been less prominent under the regime of President Hassan Rouhani.

Authorities also announced that women driving with improper head coverings would no longer be arrested, and instead receive a relatively small fine.

The easing of the enforcement has emboldened younger women to become more defiant, but recent incidents in which they have removed their hijabs in protest could still lead to prison sentences.

Soheila Jaloodarzadeh, a female member of the Iranian Parliament, said on Wednesday during an event on women's rights that the protests were the conclusion of years of restrictions, the semiofficial Ilna news agency reported.

"When we restrict women, and put them under unnecessary pressure, exactly this is the reason for rebellions," Jaloodarzadeh said, according to Ilna. "This is the reason... the daughters of Revolution Street are putting their headscarves on a stick."