Irish are "winning" on the road 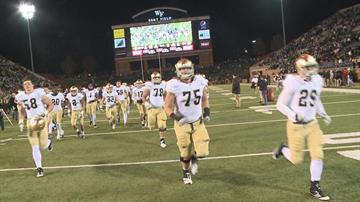 WINSTON-SALEM, N.C. – The Fighting Irish are winning on the road. Notre Dame is 3-1 on the road after winning 24-17 Saturday at BB&T Field in Winston-Salem. The team has an overall 6-3 record on the season. The Irish said Saturday’s win over Wake Forest was one that didn’t come so easy.

“I think we did a great job of sticking together and grinding one out,” said Quarterback Tommy Rees.

Team Captain Harrison Smith said after giving up a touchdown just 28 seconds before halftime, they were sent into the locker room with something to fight for.

“That just kind of left a chip on our shoulder as a defense we wanted to come out and shut them out the second half,” said Smith.

Coming back in the second half is when the Irish pulled ahead.

“The third quarter was the deciding part of this game in terms of our ability to put points on the board,” said Head Coach Brian Kelly.

Kelly said he’s proud of his players for sticking through a tough game.
“Gritty, tough, we had guys injured. Manti was playing one leg and he’s fighting, playing for his teammates, playing for Notre Dame,” said Kelly.
Manti Te’o wasn’t the only Irish fighting through an injury. Starting Center Braxston Cave didn’t come back into the game after an injury in the third quarter.
“You don’t want your starters going out, but you count on the next guy,” said Rees.
In this case, was Mike Golic.
“Mike Golic did a great job coming in. We lose our center and we close out the ball game,” said Kelly.
Kelly said he want his team to keep playing consistent football.
“We have a sign, I don’t know if you know this, that says play like a champion, and to play like a champion you have to play consistently. You can’t have spurts. Tonight was great step in that direction of playing on the road, against good competition, down at halftime, come back a couple of times,” said Kelly.
This week the Irish are hoping to improve their record on the road when they travel to FedEx Field to face Maryland.
Share this article: