Irish back on the gridiron to prepare for Navy Midshipmen 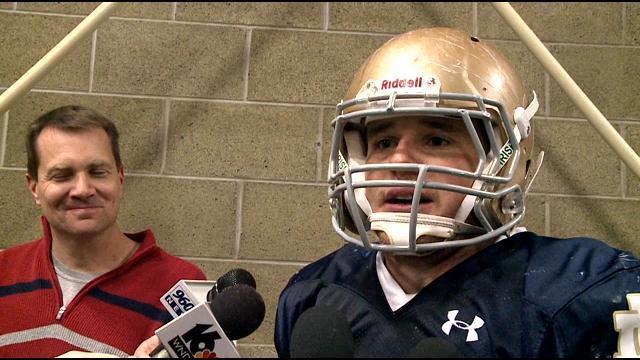 Notre Dame's Fighting Irish are back on the gridiron this week preparing for the 4-4 Navy Midshipmen.

The Irish have put a tough loss to Florida State behind them.

“We tried to take the learnings we had in that game and we really focused on that for the couple days after that, and we've had a bye week now and we've really moved on to Navy,” Irish linebacker Joe Schmidt said.

“A bye week is always a good time to get some rest, so coming back, we got after it Monday, kind of shook off any of the rust that we had,” Irish center Matt Hegarty said.

The Irish are ready to get back on the field and take on the Midshipmen under the lights this Saturday.

“I think Navy does a great job of controlling the speed of the game in a sense,” Irish quarterback Everett Golson said.

Navy is third in the FBS independent standings, and its defense ranked 75th in the nation. A defense that's led by Daniel Gonzales who's tallied 57 tackles this season.

“Like Coach Kelly said, they limit your possessions, that's why you have to be so efficient, that's why wide receivers, running backs, everybody has to be on the same page,” Golson said.

The Midshipmen boasts an offense that's ranked 2nd in the nation rushing, racking up more than 2,000 yards this season.

“These guys have just as much academic and football responsibilities that we do on top of their military responsibilities so it's a very disciplined group, they have no quit in them whatsoever, its always a challenge,” Irish cornerback Matthias Farley said.