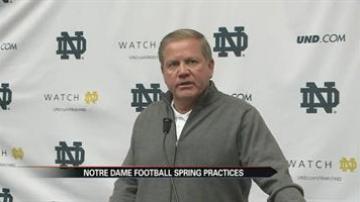 Kelly described this season's team of a lot of talented, but inexperienced players.

He says with a lot of young players-there's a lot of opportunity for some of them to step up and take over those leadership roles this year.

"Everett has to continue to evolve. Malik hasn't stepped on the field and then Deshone Kizer is going to come in with no experience," said Notre Dame Head Football Coach Brian Kelly.

Inexperience gives younger players like Malik Zaire, who redshirted as a freshman last year, a chance to step up into those first string spots this spring.

"Huge spring for Malik Zaire. Huge. He's got to step up, he's got to show a maturity level in terms of leadership, taking over the offense," said Kelly.

Kelly says there are no guarantees for former starting quarterback Everett Golson who is back this spring after a year off in academic exile.

He says there is still room to grow for Golson, who took his team all the way to the national championship game in 2013.

"It's never been a question about his work ethic. I think the quarterback just by its position is going to be a leader so what we're working on with Everett is just consistency," said Kelly.

Kelly says he wants his best quarterback on the field come this fall-so in order to find 'his guy'-he says Zaire won't be spending much time on the sidelines during spring practices.

"He's no longer, 'Hey Malik, go take a couple of reps here.' He's got to practice with the vision of him being the starter against Rice," said Kelly.

Kelly says Golson has grown as a player during his time off campus.