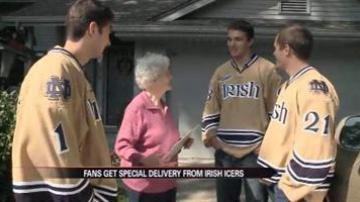 Friday was hockey night in South Bend! Or at least that’s how some lucky fans felt after the Irish Icers showed up on their doorstep!

Hockey players spread out across Michiana- from Elkhart to Cassopolis- to honor some of their biggest supporters!

With Hockey season just around the corner, what better way to get fans excited than having the team show up on their doorstep.

One lucky super fan, Susan Scott couldn’t contain her enthusiasm when she opened her front door.

"This is just like so cool. This is the coolest thing that's ever happened to me, like ever."

"I mean I'm just shocked,” gushed Scott. “We've been waiting for our tickets and yesterday I know I heard the UPS truck and Ii thought he was stopping but he didn't! And today, it's like wow! This is so much better than UPS!"

But Scott wasn't the only stop for the Irish on Friday. The trio also surprised Elizabeth Dirst. She's been a season ticket holder since 1975.

Johns chuckled and said, “37 years?! Woah! That's a little bit older than me,"

And even after all this time, for Dirst, the season can't come fast enough.

"It was definitely cool to see our fans just as excited as we are to start the season,” said Johns. “We've all been waiting since last year and just to see how excited they are, how pumped they are and excited they are for us is just unbelievable."

The Irish play their first exhibition game on Oct. 7. At the Compton Family Ice Arena against the US Under 18 hockey team.