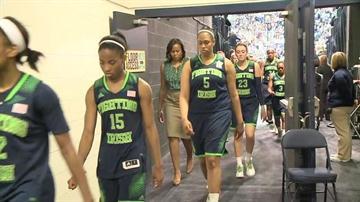 “Everybody is just sad. We don’t realize how great of a season that we had because we just ended on a loss to our rivals,” said Irish guard Lindsay Allen.

Notre Dame still had an impressive season, in what was expected to be a rebuilding year after losing star Skylar Diggins.

The Irish were previously undefeated before losing to UConn in the National Championship game.

“Looking back at it we had a great season and we did so many things that a lot of people said we couldn’t do, so that’s the biggest thing,” said Jewell Loyd.

For this year’s graduating seniors, they can vouch for how valuable NCAA tournament experience is, especially at its highest level.

“Yeah, we lost, but I mean having that experience next year with Markisha Wright and Taya, as a freshman coming in, and doing what she did, it’s only going to help them,” said Natalie Achonwa.

Notre Dame Head Coach Muffet McGraw said the win over Maryland in the Final Four helped her younger players build confidence, and she hopes the UConn loss will now serve as motivation.

“Then to have this game hopefully it’ll inspire them to be back in the gym really soon and start working on next year,” said McGraw.

Loyd told ABC 57 in the locker room that the off-season for her starts on Wednesday.

Ten players are returning to the Irish next season from this year’s roster, including Jewell Loyd who was a 2014 NCAA All Tournament Team member.