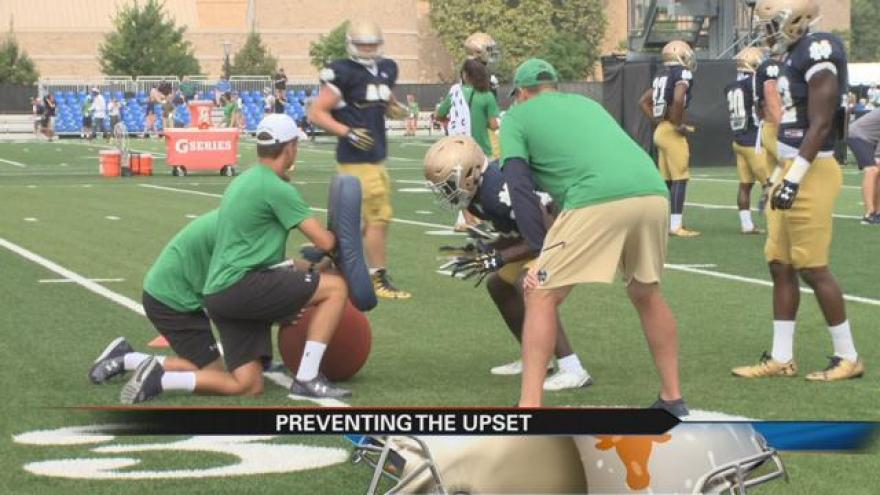 Fans are hoping the Irish team can cruise into that Nevada game with a big win.

Notre dame is ranked 10th in the country and trying to prevent the upset. How does a young team with little experience pull that off?

We spoke with players a few days ago about how they prevent an upset.

The Irish know the Longhorns are out for blood after getting embarrassed last year in South Bend.

So they prevent it by understanding that this isn't even close to the same Texas team.

"You know last year wasn't there best showing against us and we all kind of know it, we understand they have a chip on their shoulder,” said DeShone Kizer.

A 38 to 3 defeat will do that to just about anyone.

The confidence of the Irish is high according to the players but this isn't the same Texas team from a year ago.

"You have a little comfort going back, but at the same time we know they got better from last year. They didn't forget last year, so they'll be coming after us,” said James Onwualu.

So if ever there was a game to be on high alert, this is the one for Notre Dame.

With emotions running high, a new Texas team awaits, this time with revenge on their mind.

"They're at home, they're a lot more hungry. They remember what happened last year and they're not trying to make those same mistakes and they're trying to improve on their season and trying to kick this season off with a new start and they're coming out with a lot of intensity. And you know, we're going down there to a new environment and it's going to be exciting for the both of us," said Malik Zaire.

The Irish are a mere three and half point favorites so even Vegas knows this has the makings of a much different game.