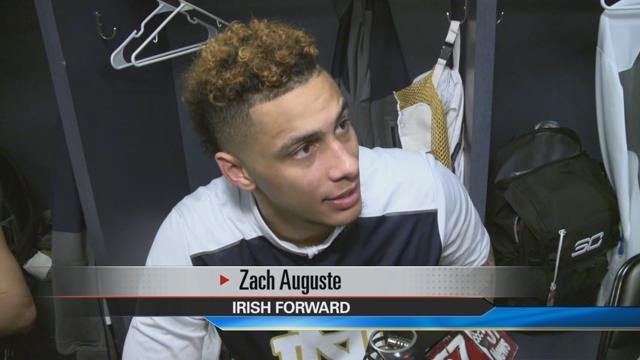 ABC 57 traveled to The Barclays Center in Brooklyn to catch everything Fighting Irish during the men’s basketball tournament against Stephen F. Austin Sunday afternoon.

We caught up with players, coaches and other fans for their reaction on Sundays game.

“It’s just unbelievable man you know we just stuck to what we do best and we just believed in each other. We stayed confident throughout the whole game and got the win,” said Forward, Bonzie Colson.

It seemed for a few minutes that the glass slipper was going to fit for Stephen F. Austin but it turned out to be Notre Dame with an incredible final two minutes.

We also caught up with head coach Mike Brey to ask what it was like in the huddle during that time out.

“It’s more our guys, they said ‘coach hey they’re in there talking, we’ve been here before’. V.J. Beachem I thought was fabulous, and he’s such a calming effect anyways. They were really poised and talking about what they needed to do,” said coach Brey.

Governor, and former presidential hopeful, Chris Christie was in the stands for the last two games to watch Notre Dame. His daughter, Sarah, is a student at Notre Dame in South Bend.

He was in the locker room after the game celebrating and talking with the players as well and we were able to catch his reaction to the win.

“Just hugged them and told them I was proud of them. And they know they’ve seen us around a lot. I was just proud of them because not only are they a great team but these are great young men and they make the university proud and they make us proud to be a part of it,” said Christie.

The Irish men’s basketball team is now Philly-bound and Sweet 16-bound. They will play the winner of the Wisconsin/Xavier game.