Irish move on to Air Force 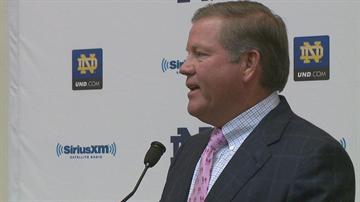 NOTRE DAME – The Irish are on a winning streak with 3-2 record on the season, but Head Coach Brian Kelly isn’t satisfied just yet.

“I don't think you walk away going ‘hey we've arrived here’. There were some good things that we did, but we've got a long way to go,” said Kelly

Kelly isn’t ignoring the fact that the Irish beat Purdue 38-10 on Saturday.
"Our backs ran hard. Our receivers blocked very well. We tackled, and those were all the components of playing winning football,” said Kelly.
He’s just ready for more.
The Fighting Irish are returning to play at home after two games on the road. This week the Irish will have a tough opponent and that’s Air Force.
“A team that gives you so many different things to defend. Offensively as you know one of the top rushing teams in the country, but at the same time Jefferson has thrown, I think, one of every six passes has been  a touchdown,” said Kelly.
Kelly said the Falcons are a veteran team with fourteen seniors on the roster, which makes it even more important for the Irish to leave the Purdue victory in the past and move onto this weekend.
"That's why were quick to get our attention to Air Force. After enjoying the win for twenty-four hours against Purdue, because it's going to be a great challenge for our football team,” said Kelly.
Saturday’s game starts at 3:30 p.m. at Notre Dame Stadium.
Share this article: