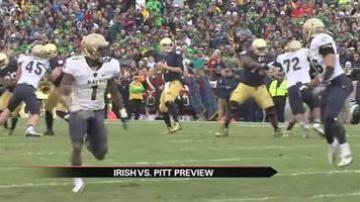 NOTRE DAME, Ind.-- Friday, the Fighting Irish leave South Bend and travel to Pittsburgh to face off against the Pitt Panthers, where they will play under the lights Saturday night.

Offensive lineman Chris Watt is back just in time to help his teammates go up against Pitt's ruthless defensive tackle, Aaron Donald.

“Once he got the swelling out of there and the pain, he’s taken virtually all of the first team reps and he’s looked good in practice this week,” Irish Head Coach Brian Kelly said.

Donald Devastation, as the Panthers call him, leads the nation in tackles for loss with a total of 19.5 solo tackles.

“We have to do a good job of trying to not give him some freebies and make him earn everything he gets,” Irish offensive lineman Zack Martin said.

“He’s good at reading blocks, so if he feels a guy with his weight on one side he’ll throw them and he’s a smart football player,” Martin said.

But Donald isn't the only threat the Irish O-line is prepared for.

“They also have another good nose guard, just the D-line in general, they’ve got some speed on the outside, so the strength with those two interior guys will be good,” Irish center Nick Martin said.

To win this week's battle, the Irish have to be synced as an offensive unit.

“We just have to play together. We have to play our game as an offensive line and see things out of one set of eyes and be on the same page every play,” Nick Martin said.

Pitt's senior defensive tackle Aaron Donald has earned a total of nine quarterback sacks this season and he ranks third nationally in sacks, averaging about one sack per game.