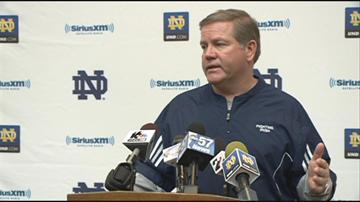 NOTRE DAME, Ind. – The Fighting Irish are putting some work in on the practice field for their appearance in the Champs Sports Bowl this December.

Notre Dame had their first bowl practice on Tuesday. Head Coach Brian Kelly said the team had two practices, first with the younger players and second with the veterans.

The Irish will continue preparing for the next three weeks until they face Florida State in the bowl game on December 29th in Orlando.

Kelly said the practice schedule will let up some next week for the players during final exam week.
Quarterback Dayne Crist did not practice with the team on Tuesday. Crist hopes to transfer for his final year of eligibility, and Kelly said they are letting him do what he needs to do to prepare for the next semester, and he will not be part of their bowl preparation plans.
Share this article: