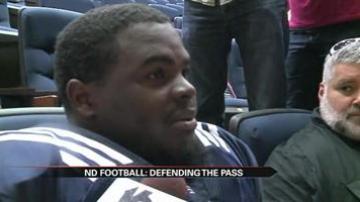 NOTRE DAME, Ind.-- The Irish are 3-2 on the season and looking to tally more wins starting with Arizona State this week in Arlington, Texas.

Arizona State's offense is best described as explosive this season.

Ranked 8th in the nation for their passing attack and averaging more than 350 yards per game, they are a threat to the Irish secondary.

“They utilize every aspect they have in the field whether it’s a running back, they have a good back-shoulder quarterback and great receivers so I think they just utilize that on every play with read option and then the option to throw also,” Irish cornerback Cole Luke said.

They are fast on the ground as well. With an offensive line that wears down defenses and makes gaps for backs like Marion Grice, who has scored a total of twelve touchdowns in just four games.

That's 72 points--the most for any running back in the nation.

“They have really great offensive linemen, they’re very shifty and they carry their weight good, so they’re very elusive and we just have to work on getting out of the blocks and just doing what we do,” Irish defensive lineman Kona Schwenke said.

The Sun Devils had a total of 612 yards in last week's 62-41 win over USC. No matter what they bring to the table this week, the Irish say they just need to get back to winning.

“Something that we need to get back to is just finding a way to win. A W is a W. In a couple of games, we were behind and people thought it was over and we ended up winning,” Irish nose guard Louis Nix III said.