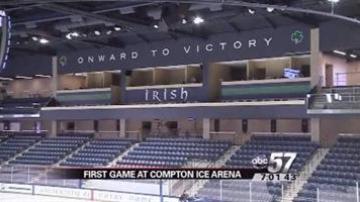 SOUTH BEND, Ind. -- The Fighting Irish squared off against Rensselaer College for the first game at the Compton Family Ice Arena.

The doors to the arena opened up at 6:00 p.m. for season ticket holders, but the line was out the door and wrapped around the block well before 6.

Sophomore left wing, Jeff Costello told us the team was excited to take the ice but they didn't want to hype it up too much.

"The guys are excited, but we just have to stay calm out there. This is just another hockey game."

Costello said the team needed to come out on their toes after the disappointing loss to Ohio State last week.

The game started at 7:35 p.m. at the Compton Family Ice Arena.