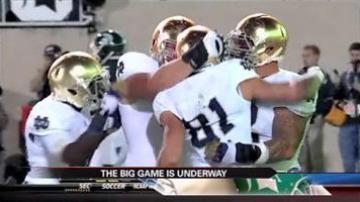 EAST LANSING, Mich.-- The Notre Dame fighting Irish were put to their first big test of the season in their road opener against the Michigan State Spartans.

The Notre Dame Fighting Irish destroyed the Spartan statistics and broke their 15 home game win streak, but it wasn’t even the close game  fans were expecting.

The Irish dominated the Michigan State Spartans and they started early.

Notre Dame put the first points on the board just 4:30 into the game when quarterback Everett Golson threw a 36-yard touchdown pass to tight end John Goodman scoring the first offensive touchdown of the year against Michigan State’s defense.

“You know [that pass] wasn’t really designed in the play but I think that’s one of those things I’ve talked about previously,” said Golson. “Just really improvising and I think me and Goodman really connected there to score the touchdown.”

The next and final touchdown of the game was just a few minutes into the second quarter, the Irish scored on a 51-yard drive that was capped off on a 6-yard rush by Golson.

Michigan state responded with a field goal but the Irish defense kicked into gear and shut out the Michigan State offense in the second half-- holding them to only 237 yards in the game.

“I feel beat up right now to be honest,” chuckled Nix.  “I think we beat each other up.”

Notre Dame’s All-American linebacker, Manti Te’o had 12 tackles and a fumble recovery after MSU botched a lateral that essentially sealed the game.

The Irish went on to hit a 46-yard field goal and walked away with the 20-3 victory over Michigan State.

With another win under their belt, the Irish are now looking forward to their own game under the lights at home against Michigan next weekend.