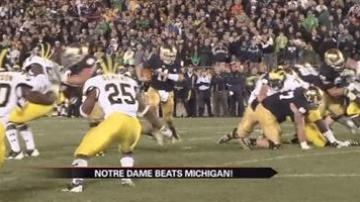 No. 11 Notre Dame hosted No.18 Michigan under the lights on Saturday night and managed to keep the Wolverines from scoring a touchdown while holding them to only six points.

Meanwhile, the Irish offense was able to squeak out enough yardage to hit two field goals and even a seredipitous touchdown.

But the big story of the night was the turnovers.

Everett Golson threw a pick on his first play of the game in the Irish red zone. Fortunately, the Notre Dame defense was able to contain Michigan quarterback, Denard Robinson and force a field goal attempt that went wide.

Golson showed his inexperience with one other pick later in the first half, but the rookie's two turnovers were nothing compared to veteran and all-star QB, Denard Robinson's five interceptions in the first half.

Irish inside linebacker, Manti Te'o recovered two of those interceptions and even managed a 28 yard return on one. Both of Te'o's picks put Notre Dame in a position to score on the following drive.

Five interceptions is the most the Irish defense has had since 1988 when the Irish played Purdue.

Tommy Rees played the majority of the game at quarterback for the Fighting Irish. He replaced Golson in the second quarter.