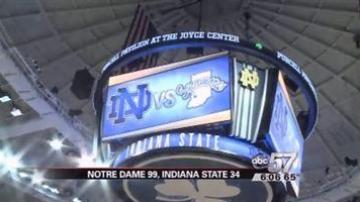 NOTRE DAME, Ind. -- From the gridiron to the hardwood, the football team wasn’t the only Notre Dame team to pull off a victory over the weekend.

After picking up an 81 to 61 win over Akron in the home-opener Friday night, the women’s basketball team was on the court again.  Notre Dame took on Indiana State over at the Purcell Pavilion. They walked away with a 99 to 34 win, and fans were of course thrilled.

"I’m always excited to watch the Notre Dame women, They're the best in the country,” says Karen Lewallen. "The attitude is so positive and they're so focused on each game that I think they will be able to win a national championship."

The Irish women will play again at home Thursday night in the last preseason game for the National Women's Invitational Tournament.

They will play Long Island or Hartford. Tip-off is at seven.

It was also a big day for Irish senior guard Natalie Novosel as she officially became the 29th Notre Dame women's player to reach the 1,000 point career mark.

Novosel scored 10 points against the Sycamores. She needed just nine to reach the milestone.