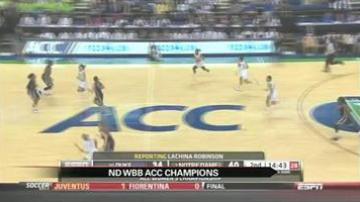 SOUTH BEND, Ind. -- The Notre Dame Fighting Irish Women's Basketball team made history by capping off a perfect regular season with a 69-53 win against the Duke Blue Devils in the ACC Tournament Championship Final at Greensboro Coliseum Sunday night.

The team's 32-0 record makes it best season in program history.

This is also the first ACC title that any Notre Dame team has won since the school joined the conference last year.

Sophomore guard Jewell Loyd scored a tournament-high 26 points in the contest and went on to earn ACC tournament MVP honors.

Loyd's backcourt mate, senior Kayla McBride, put up 25 points of her own to help reel in the win.

The team's expected to draw one of the top seeds in the NCAA tournament later this month.