Is it time for an ice skating rink in Buchanan? 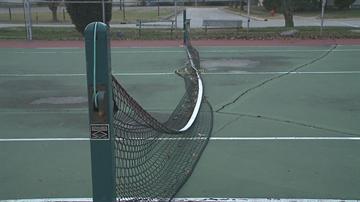 BUCHANAN, Mich. – Stark Elementary School closed its doors months ago and since then the playground has seemed rather empty, especially the tennis courts.  People living nearby say the courts have fallen into disrepair and are no longer usable.  But, while you may not be able to play tennis on them, some creative minds have come up with another option.  The idea hatched on the city’s widely used Facebook page, flood the courts and turn them into an ice skating rink during the winter.

“My kids think that would be a great idea too, something to do in the winter and have more activity in the winter,“ said Chris Nordstrom, who lives nearby and was disappointed to see Stark close.  “My daughter went to school there and we were sad to see it go.”

“The idea has a lot of merit,” said City Manager Bill Marx.  “The city is going to look at that and see what is possible.”

Marx explained that people have been asking for an ice rink in Buchanan for some time.  Ideas have ranged from bringing in a portable rink to closing off and flooding a city street.  Turning the courts at Stark into a rink might not be so hard.

“Creating a dyke or a barrier around the tennis courts and pulling up the fire truck and flooding the tennis courts,” Marx explained.  “We’re going to do some investigation and see what’s possible.”

Of course, the idea is still new and hasn’t been discussed by city commissioners.  But, Marx is optimistic that it could be approved.

“If it isn’t too costly and we’ve got the time to devote to it we may be able to get that accomplished,” he explained.

The only problem with putting a rink at Stark, according to Marx, may be the popularity.  In the summer, when a neighboring baseball field is in use the police department often has to provide traffic control.  But, some neighbors wouldn’t mind.

“Yeah, that’d be alright, we’re used to the crowds in the summertime, we have softball and baseball here,” Chris Nordstrom said.  “Better than having and empty building there, gets some activity or something going.”

Bill Marx said that the idea will be discussed among city commissioners soon.