ISIS' power is waning, but its child slave trade is still booming 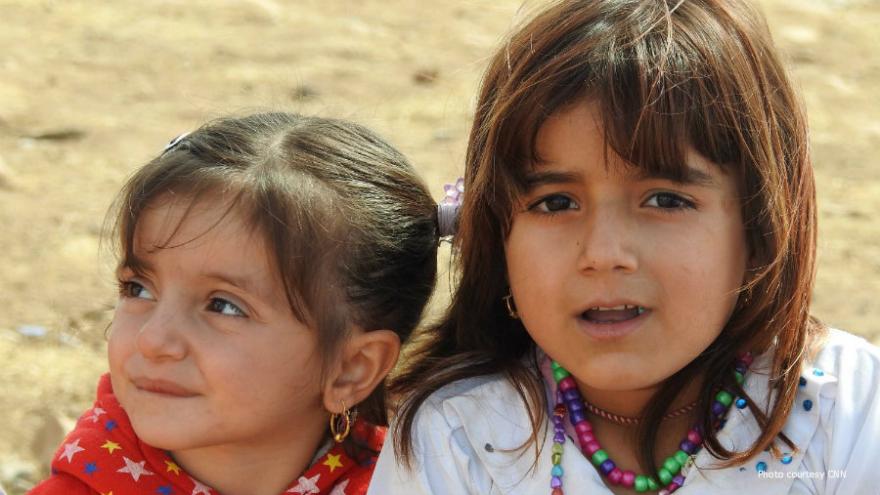 (CNN) -- A lonely four-year-old stands on a patch of waste ground that passes for a football field. This is where he plays, silent and alone. After years in ISIS slavery, Lazem is finally safe. But he has no one to talk to and, until a few days ago, didn't even know his own name.

A member of the Iraqi religious minority, the Yazidis, Lazem was stolen from his family as a toddler when ISIS fighters overran northern Iraq's Sinjar province in August 2014, pillaging towns and villages. Thousands of Yazidi men were killed at the terror group's hands; women and children from the community were captured and sold.

Three years on, ISIS' slave trade continues to prosper, even as the extremist group's power and influence wane. ISIS has been largely driven out of its former Syrian stronghold, Raqqa, in recent days -- only sleeper cells are thought to remain in the city.

According to the Kurdistan Regional Government's (KRG) Office of Kidnapped Rescues, more than 3,000 people -- most of them women and children -- are still being held by the terror group.

Many of those who manage to flee their ISIS kidnappers find themselves held to ransom, at the mercy of unscrupulous smugglers. For this reason, only half of Yazidi captives have been rescued, according to the KRG.

They called him 'boy'

Reunited with his father, Qassem Abdu Ali, at the Rwanga community camp, home to thousands of Yazidis who fled ISIS' incursion into Sinjar, Lazem sits quietly behind the weather-beaten figure; ten days since they were reconciled, he has not yet managed to say a word to his father.

Separated from those who loved him, Lazem grew up learning Turkmen and Turkish, the languages of his ISIS militant captors, rather than his native Kurmanji, the Kurdish dialect spoken by his community.

First sent to the ISIS stronghold of Tal Afar, Lazem ended up in Turkey, well outside ISIS territory. Little is known about how he got there. Even in Turkish, he is reticent, so few details of his time in captivity are clear.

Bought initially by the wife of an ISIS commander who had no son of her own, Lazem is thought to have worked as a servant. He says his first "owner" was nice, but refuses to talk about the second.

He looks up tenderly at those who try to speak to him, constantly tugging at a strand of hair concealing a scar on his forehead, but where it came from, he won't say.

They called him "Ghulam" (boy), authorities charged with rescuing Lazem tell CNN. Until he was brought back to his community last week, he thought "Boy" was his name.

Marwan, 11, was captured by ISIS at Mount Sinjar, the site of a major Yazidi massacre at the hands of ISIS in August 2014, and shuttled from place to place, bought and sold 11 times, spending much of the last three years in Raqqa, the self-declared capital of ISIS' so-called caliphate.

Used alternately as servant and soldier, he was taught ISIS' radical interpretation of Islam and dispatched to the frontline of ISIS' war, where his captors placed him front and center during battle -- common practice for Yazidi child soldiers.

"ISIS taught me how to use an RPG, a Doshka, a pistol, a grenade," says Marwan, as he sits in the pick-up truck carrying him over the border from Syria into Iraqi Kurdistan, and his makeshift home in a refugee camp.

The Soviet-era heavy machine gun must have been tough for a child his age to handle we say, surprised. Marwan's eyes widen. "No, but I was very strong!" he exclaims.

"They used Marwan as a servant in their houses, and as a soldier in their frontlines, because Marwan doesn't matter to them," says Abdullah Shrem, who coordinated an elaborate smuggling operation to secure Marwan's release. "It doesn't matter if he is killed or attacked."

"When I saw my mother, I cried tears of joy," a wide-eyed Marwan tells CNN, just hours after the pair's emotional reunion.

"I couldn't sleep all night," Marwan's mother, Umm Marwan, says. "I can't eat because I am full. I am full of excitement." She, too, was once an ISIS slave -- most of the Yazidi women abducted by ISIS were traded for sex.

Her husband and Marwan's brother remain in captivity.

On the Kurdish Iraqi side of the border, in the shadow of the barren hills of Mount Sinjar, the pair climb down from the pick-up truck, to meet the boy's benefactor.

"Do you know who this man is?" one of Marwan's relatives asks him, gesturing at Shrem.

"Yeah, he's the man who purchased me," says an obliging Marwan.

"Rescued you," says Shrem, quick to correct him.

But Marwan isn't entirely wrong. For the last three years, he has been bought and sold over and over. His freedom, too, has come at a price. It's a reality that Marwan takes in his stride.

The Kurdistan Regional Government (KRG), a semi-autonomous body that governs Kurdish-controlled regions in northern Iraq, says it is spending millions of dollars to secure the release of Yazidi slaves.

The ISIS slave market began with bazaars at which Yazidi women, children, and the elderly were sold into all forms of servitude -- including sex slavery.

Their rescue has spawned an altogether different economy.

Once out of ISIS's hands, Yazidi captives fall into the hands of smugglers, not all of whom are well-intentioned.

Even for those, like Marwan and Lazem, who are lucky enough to be rescued from their ISIS captors, the path back to "normal" life is not an easy one.

When Lazem's father -- the only free member of his family -- was taken to Turkey by the KRG to meet his son, he was met with a harsh response from Turkish authorities.

"They couldn't believe he was my son," Abdu Ali tells CNN. "They said: 'How come your son speaks Turkish and you don't? There's no way he's your son.'"

KRG officials say Abdu Ali had to take a paternity test to prove his relationship with Lazem; it wasn't until two months later, when the results confirmed they were father and son, that the pair could return together to Iraq.

Between the rows of makeshift houses, Lazem wanders the rocky alleys of the Rwanga camp.

A boy runs up to him and flings his arm around him in a huge hug. The pair don't know each other's names, they don't even understand each other's words, but here and now, safe and with family nearby, they share the language common to children around the world: Playtime.

Lazem is still young enough that he may one day forget the worst of his ordeal at the hands of ISIS, but for other, older children like Marwan, that may prove more difficult.

His bright green eyes and mild voice make it easy to gloss over the fact Marwan was forced to fight for the world's most reviled terror group. Now and then, though, he shows flashes of anger, a reminder of the horrors he's been through.

"Where are you taking me? No, I don't want to go!" he screeches as he is escorted to the vehicle waiting at the border to take him home. He fights to break free of his mother's clasp. It takes several minutes to convince him that he won't be sent to yet another captor.

There is little counseling on offer for repatriated Yazidi boys to help treat their trauma or counter the brainwashing they were subjected to. Many captives have been indoctrinated to hate their own communities, in keeping with ISIS' extremist ideology.

But Shrem says that the KRG's Office of Kidnapped Rescues "properly screens" the boys before they are returned to their families. "Marwan told us he was eager to go back home, and said he believed the Yazidis were the best and most honest people," he says.

Many of them are held for months, even years, by non-ISIS groups who demand a ransom for their release, CNN has learned from official sources.

As the captives change hands, their abductors hope to stack up profits, boosting prices and making the abductees' release increasingly costly as time passes.

In the Iraqi Kurdish town of Zakho, Marwan finds a crowd of extended family members waiting to welcome him outside of his family's tent; he smiles sweetly as his eyes meet theirs.

He is greeting his sisters and cousins with polite handshakes and cheek-to-cheek kisses, when from the middle of the crowd, an elderly woman pulls him into her chest: his grandmother.

Marwan appears to battle back tears, torn between the boy he is and the fighter he was forced to become.

He glares at the camera and the family surrounding him before - shaking - he finally begins to weep into the crook of his grandmother's neck as the crowd surrounding them breaks into a crescendo of sobs.

"Where is your father? Where is your brother?" she wails repeatedly, pleading for news of her abducted son and grandson.

Even with Marwan returned to them, the family is still divided; their plight at the hands of ISIS' slave trade goes on.