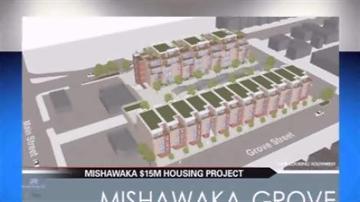 MISHAWAKA, Ind. -- An Israeli investor has set his eyes on the Saint Joseph River in Mishawaka for a $15 million housing project.

Nir Davison is a family man from Israel.

In 2008, he says he "went fishing" for an area in the United States that would have a high demand for rentals.

Someone tipped him off about Michiana and he says he isn't disappointed.

Davison has flown from Israel to Michiana every six weeks for quite some time.

His company, Barak Group, owns a few hundred renovated homes in the area.

Now he’s setting his sights on the water.

He plans to develop around 70 living units, apartments and townhomes, near the corner of Mishawaka Avenue and Main Street.

"It's going to be a mixed use with a nice vibe, some cafes, maybe yoga, a gym, a swimming pool,” said Davison.

The intersection is a main artery for anyone heading into downtown.

That's why other business owners like Mike Leippert picked the spot.

"I rented here because I figured this development would occur. I didn't know exactly where it would occur,” said Leippert.

Now he does and he's excited the time has finally come.

"I'm glad that it’s going to be residential because we need more foot traffic. There isn't really foot traffic here. It's pretty much drive up and leave,” said Leippert.

Now no one will want to leave. And the architect says it'll be thanks to the development’s cool, modern vibe.

"I've said in one case--anyone who is young no matter what age,” said architect Scott Sivan.

If all the zoning is approved--they hope to break ground this time next year.

Some critics have talked about the eleven condos across the street from this site that still haven't sold since they were built a few years back.

But these developers think they're offering a different product with a ground-level garage and second story courtyard for the view.

Plus they say the timing is better now than a few years ago.