Italy earthquake: A country in mourning begins burying the dead 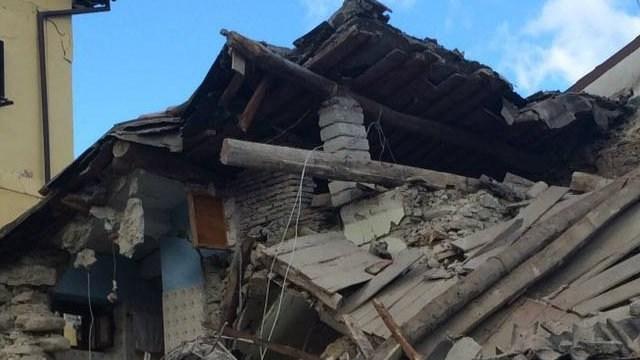 ASCOLI PICENO, Italy (CNN) -- Italy began the painful task of burying its dead Saturday following a massive earthquake, as aftershocks rattled the heart of the country and the death toll climbed to 290.

In the town of Ascoli Piceno, a state funeral was held in a local gym, a basketball net the backdrop of the altar.

Thirty-five coffins adorned with flowers and framed photographs sat in three rows for victims from the town of Arquata del Tronto.

Taped at the foot of each coffin was a white paper bearing the name of the deceased.

Before the ceremony, family members clustered around each coffin; at one, a teenager sat beside it on the floor, weeping inconsolably. One family encircled a coffin with peach-colored flowers and held each other in a long embrace.

Hundreds of people attended the Catholic ceremony of prayers, Bible readings and hymns, many themselves survivors in casts and bandages. A wall hanging of Jesus on a crucifix overlooked the grieving community, as mourners fanned themselves in the stifling heat.

Bishop Giovanni d'Ercole led the ceremony, telling the painful story of a little girl who was saved from the rubble, her sister found dead on top of her, apparently shielding her sibling.

"They were holding each other, between them in embrace, both death and life," he said.

"A lot of the dead were children. So a thought to you young people -- we are now living in a time of war ... The earthquake is like a war because nature does not forgive. We have to defend ourselves because it is wise. We must have a dialogue with nature and never provoke nature," he said.

But he also said that after the tragedy, the communities affected would be given new life: "A new spring and a new birth come."

"Faith is difficult. But faith shows us how to start again, with your feet on the ground and your face towards heaven."

The bishop led Holy Communion and blessed the dead, waving incense over their coffins, as mourners signed the cross.

Italian Prime Minister Matteo Renzi and President Sergio Mattarella arrived at the funeral, the latter after visiting Amatrice, a town reduced to rubble where the vast majority of deaths occurred.

The leaders met with mourners and consoled them, making sure to reach each and every family. The President also visited an emergency camp in Accumoli and Pescara del Tronto, CNN Affiliate RAI reported, on what was declared a national day of mourning.

Outside the gym, 20-year-old Paul Manaut from Rome said he had been on holiday in the region with his family but had returned home to Rome when the quake struck. He grabbed everything he had from his apartment that would be of use -- toilet paper, shampoo -- and rushed back to the area, finding that he had lost some of his friends.

After the service, he told CNN that he hoped to start a Facebook campaign to help raise money to buy items for victims, including televisions so that the kids could play video games and the adults could watch movies to forget the disaster.

"They need help. They're not strong enough yet. They haven't even realized what happened. With our help and everybody's help, we're going to build them up, because it's not the houses that fell -- a house is a house ... It's the people, they're dead inside," he said.

Even as communities mourned, the aftershocks rattled central Italy early Saturday, the US Geological Survey reported.

The rescue efforts continue through the aftershocks, though hopes of finding more people alive are quickly fading. Experts say the chances of survival drop significantly after a 72-hour period, a window that closed early Saturday.

In a hospital in Ascoli Piceno, one man talked about how he lost his mother in the earthquake.

"My first thought is my mother is here but I can't help her," Mattia Rendina said from his hospital bed, his bones fractured, his face bruised.

"She passed away to God. She's gone now," he said, tears welling up in his eyes.

"I'm like this because my mother [taught] me to be a person like this. To be strong."

To accommodate the displaced, emergency camps have been set up across affected areas, offering food, shelter and psychological support to those who have lost their homes and loved ones.

The Civil Protection Agency said 2,500 were living in the camps, and that more were being built to meet the enormous need.

Images from an Amatrice camp showed people lining up for pasta and an elderly couple sitting on the edge of mattresses on a gym floor, having a meal as those around them hugged and consoled one another.

The Italian Council of Ministers approved a state of emergency Thursday for the regions affected by the earthquake, allocating 50 million euros (about $56.5 million) in funding.

Residents gathered at a square in Amatrice, some of the women crying and hugging, as dust still lingered in the air. Men stood in stoic silence.

'So many dead, so many children'

At a camp in Sant'Angelo, northeast of Amatrice, people gathered and shared their stories of loss.

"There is no hope, too many people dead. And Amatrice doesn't exist anymore," Angelina Leone said, holding back tears. "Amatrice has disappeared, and there are so many dead, so many children."

At yet another camp in Accumoli, Anna Maria Volpetti, 52, said she had been visiting her hometown with her family when the quake hit.

"We are lucky," she said. "The earthquake was brutal. It came in waves."